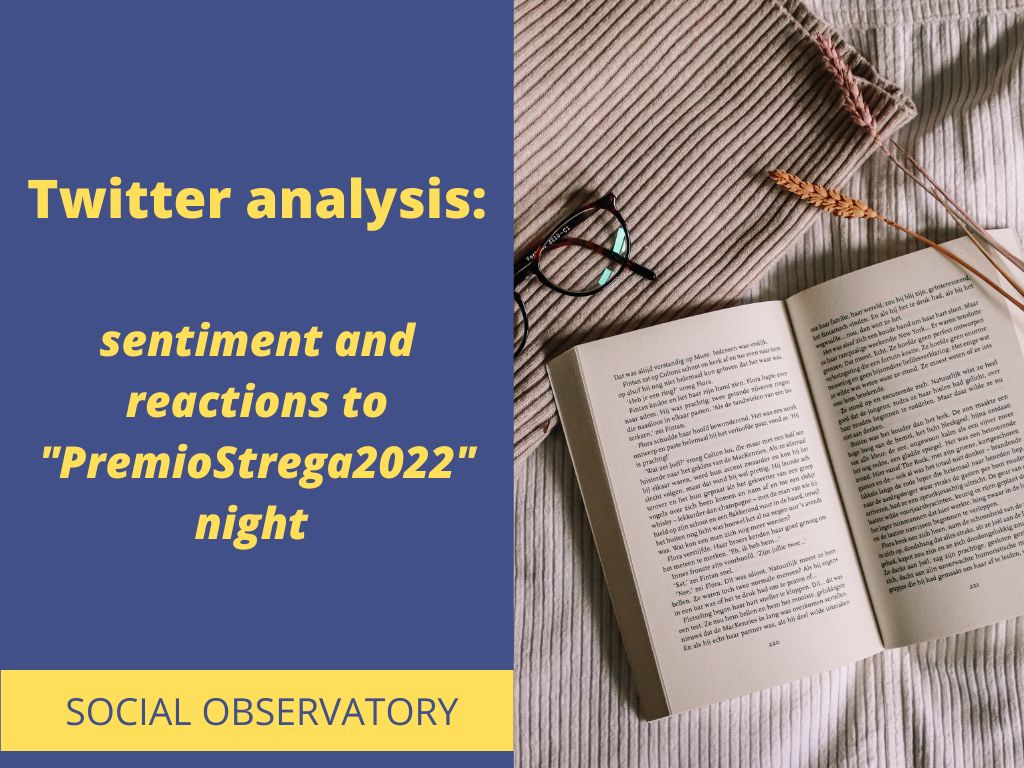 In this episode dedicated to the Social Observatory we want to talk about the awarding of the ‘Premio Strega’, which was broadcast on the evening of July 07 on Rai3.

The Strega Prize was established in Rome in 1947 by the writer Maria Bellonci and Guido Alberti, owner of the producer of the Strega liqueur, which gives its name to the award. It is a literature prize that is assigned annually to the author of a book published in Italy between 1 March of the previous year and 28 February of the current year. Since 1986, it has been organised and managed by the Bellonci Foundation.

Wanting to make a current contribution to our Social Observatory, we analyzed Twitter sentiments on the days of the award ceremony and in the days following the award presentation. The corresponding dates from 07/07/2022 to 10/07/2022.

On these four days, we counted 5744 likes, 591 retweets and 129 comments on the tweets analyzed.
On an analysis sample of 200 Tweets, interesting data emerged: 40% expressed positive sentiment, 27% neutral and 33% experienced this moment negatively. 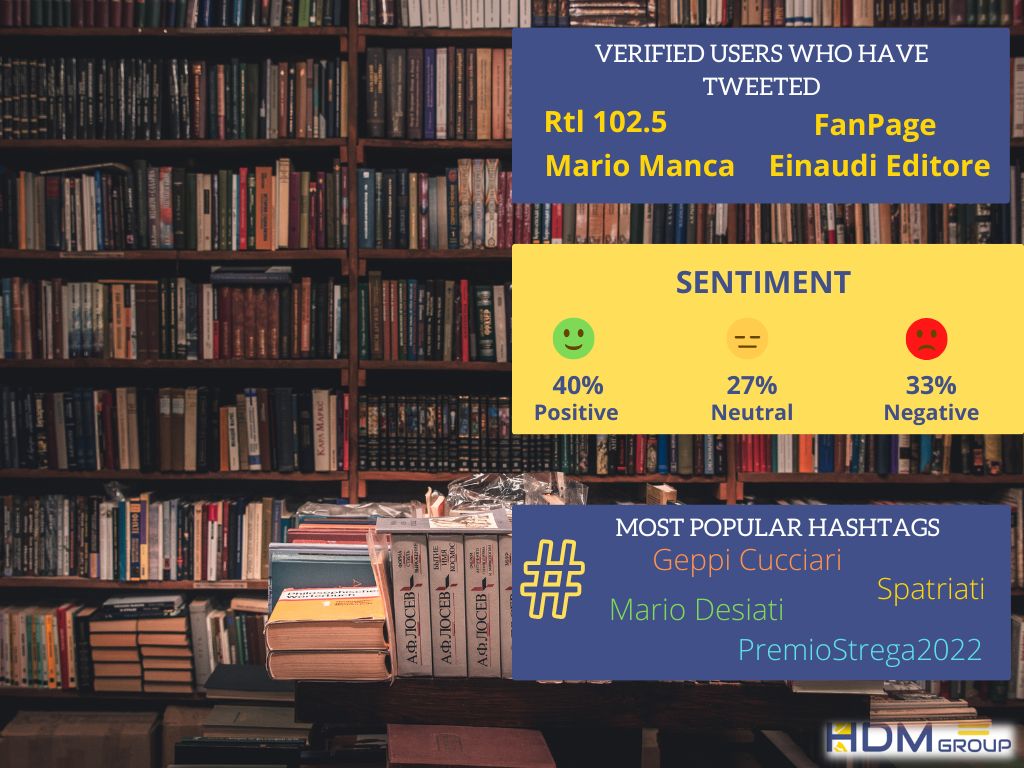 Numerous profiles of private users have commented on the subject. Likewise, several profiles of certified users such as RTL 102.5, DiscoRadio; gossip pages such as Fanpage; music journalists such as Mario Manca; publishing houses like Einaudi Editori and Gruppo Mondadori.
Looking more in detail at the posts with positive sentiment, it emerges that 36.25% refer to the presenter Geppi Cucciari and her skill in conducting the event, despite the unforeseen rain. 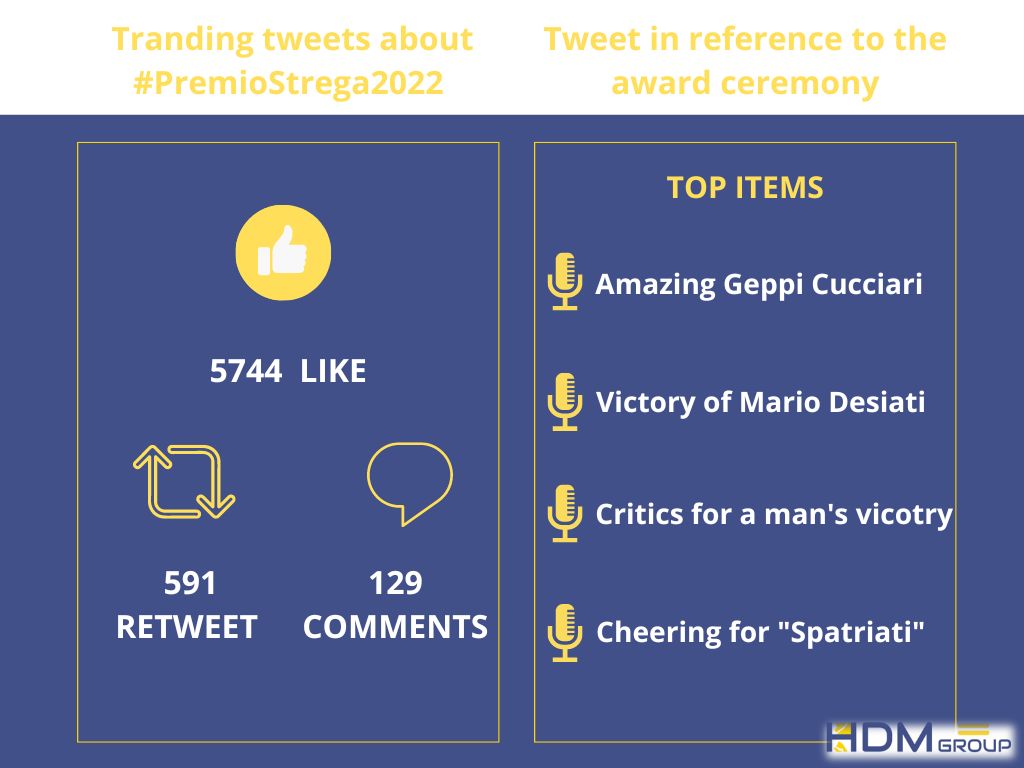 In addition, of the posts with positive sentiment, 40% refer to the real winner of the PremioStrega2022: Mario Desiati with the book ‘Spatriati’ edited by Einaudi Editori.

It is evident how users are happy with the victory of the young pugliese, but particularly with the message he wanted to transmit through his book and through his look during the evening: the search for one’s own identity, the strong social pressure and the sad story of Cloe Bianco.

The remaining posts (23.75 per cent) talk about the other candidates for the prize, such as Alessandra Cariati and Marco Amerighi.

The negative sentiment tweet is also not insignificant. There has certainly been no shortage of critics specifically of a man’s victory, even though two women had made it to the finals. In fact, as of 2022, sixty-five men had won the Prize; the gender distribution of the finalists and winners of the Prize has caused controversy and analysis of the difficulty for women writers to establish themselves. In addition to tweets of disdain for the system and social issues, there was no shortage of criticism for the choice of presenter.

More interesting data shows that 53 images were counted and only 17 videos out of the total of 200 tweets analyzed. Most tweets then, communicate mainly with a single image or a short text accompanied most frequently by a link to interviews with the winner or articles dedicated to the Premio Strega 2022.

From the tweets analyzed, we can see that the topic was mostly discussed by adults, it was rare to read young people expressing their opinion on the award.

HDM’s Social Observatory aims to emphasize the importance of information that can be obtained from social networks and the potential of web monitoring. Collecting, interpreting and studying the huge amount of data that can be obtained from the web allows companies to improve their positioning with respect to competitors, develop new lines of business and improve their communication.

If you are interested, click here to learn more, we will be happy to propose the web monitoring service that best suits your needs.